Brand Story
The Hua Shan Din hotel site was originally built in 1952 as a warehouse for the First Commercial Bank. The theme of the hotel is based upon the concept of “Preserving Hua Shan 1950.” The 50’s was the golden era of the Taipei Brewery, and the word “preserving” implies a symbolic connection to the hotel’s past as a storage facility in the banking industry, as well as a site for producing and storing alcohol during Japanese rule.

The unique logo design of Hua Shan Din by Cosmos Creation incorporates the 3 primary colors of neo-plasticism with the re-structured elements of the building’s original window frame. Neo-plasticism is an art movement that gained popularity in the 1910’s, using the primary color blocks of red, yellow and blue intersected with black and white to form abstract geometric shapes and patterns. Dutch artist Piet Mondrian was one of the most prominent artists of the neo-plastic art movement. Architectural History
One of the unique aspects of the hotel is the historical significance of its architecture. The slab and column concrete architecture does not use beams, only columns to support the structural weight. Such architectural design is simple, elegant, and allows the optimal flow of light and air. The beamless design also affords greater freedom in the design of the interior space, which can be used as a warehouse, a mall or a storage facility.

The columns of the slab and column concrete architecture have capitals to help bear the weight of the structure. There are three types of capitals: Doric, Iconic and Corinthian, and they are usually half the thickness of the slab. Hua Shan Din by Cosmos Creation has Greek Doric capitals, which are simple and elegant, and are wholly preserved during hotel renovation to showcase the unique architectural characteristics.

The building of Hua Shan Din by Cosmos Creation was formerly a warehouse for the First Bank, as well as the site of a trading company. Because it housed a bank vault in the old days, all the windows of the building have double iron grilles for security, which can only open from the inside. The building also comes with the original vents specially designed for airflow. All of these historic treasures were preserved during hotel renovation as witness to its past. With just a simple hotel logo added to the exterior, the hotel retained the building’s original light tan color to showcase its architectural texture and its elegant charm, especially when bathed in the evening light.

Mascot Baobby
The tough looking Baobby is full of thoughtful consideration as he collects the precious memories of the journey for each traveler.

Mascot Baobby is an image of a treasure chest fused with a bank vault. It has a round head of a treasure chest, with arms that shaped like the door handles of a bank vault. There is a coded lock with the current year on the front of its body. Baobby has superior memory and is well versed in history, geography, arts and culture. He is especially fond of the fun stories shared by all the travelers passing through. 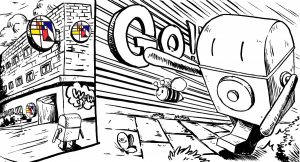