Hua Shan 1914 Creative Park
The Hua Shan 1914 Creative Park was included in the city development plan during the Japanese occupation era, and took its namesake from the first designated governor of Taiwan. It was used as a distillery that offered its first production of the Butterfly Orchid Sake in 1914. After World War II, the national government took over the facility and transformed it into the Wine and Tobacco Monopoly, renaming it the ‘Taipei Distillery’ to produce fruit wines. However, the distillery was later relocated to Lin-Ko and the facilities were abandoned.

In 1997, the Golden Bough Theater put on a performance in the abandoned park and sparked a controversy over the unauthorized use of national land. This led to a movement by the arts community to advocate for the abandoned brewery to be transformed into a performance space for arts and culture. It was later renamed the Hua Shan Designated Arts and Culture Zone. Currently, Hua Shan 1914 Creative Park has spaces for exhibitions, music performances, a movie theater, as well as restaurants and cafes. It has become a popular gathering spot for lovers of arts and culture on weekends and holidays, and the brewery’s unique and historic architectural characters further add to the part’s unique charm. Jian Guo Brewery
Built in 1919, Jian Guo Brewery has been in operation since the Japanese occupation era. It was the only beer-making facility in Taiwan, which produced the original Taiwan Beer. After WWII, the national government turned it into the Wine and Tobacco Monopoly’s second brewery, with the highest production volume reaching 1.2 million dozen beers. The Jian Guo Brewery was built with bricks, stone and steel beams, and has been designated as a historic structure of Taipei because of its commercial and historical value.
(We do not serve alcohol to anyone under 18.)

The North Gate
In the Chin Dynasty, the emperor established and constructed the Taipei Province in 1882-1884. The north gate was positioned to face the North Star as well as to show subordination to the emperor in the capital of Beijing. For defense purposes, the gate was a solid structure built with two inner walls. The current location of the gate is on the intersection of Chung-Hsiao West road, Yan-Ping South road, Bo-Ai road and Chung-hua road, which was on the gateway between Taipei and the Dadaocheng Dock. All the Taipei gates were damaged when the island was under Japanese rule and from decades of neglect. After reconstruction post war, only the north gate retained its original structure, and was listed as class one national historic structure.

Hsimending
Located on the west side of the city, Hsimending has long been a commercial and entertainment center of Taipei, and was later transformed into the ‘Champs Alysees of Taipei’ by the Taipei government. It has a variety of squares and activity spaces and is a hotspot for lovers of sports, arts and musical performances. Here is where you can truly experience the diverse charm of the Taiwan culture, as you witness the individuality of the younger generation on full display, while soaking in the historic side of the old city.

West Gate Red Fort
Orginally named the octagon market hall, the West Gate Red Fort was a marketplace built in 1908 under the Japanese rule to serve the residence surrounding the West Gate. The gate was built with red bricks and steel reinforced concrete floors, with steel roof in a unique octagon shape. The market space sold flowers, books and medicine, and was also used later as a stage and a theater. After renovation, it is now a dedicated space for the arts industry and for exhibitions and performances. 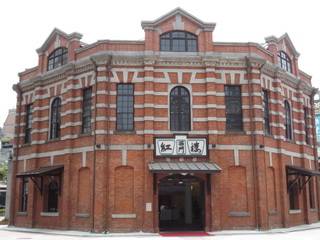 Di-Hua Street
From the end of the Chin Dynasty until when the island was under Japanese occupation, Dadaocheng was the most bustling area in Taipei, and Dihua Street is a representing image from this past. Since the early days, Di-Hua Street has been the spot for the wholesale of goods, teas, fabric and medicine, and is perhaps the most well preserved street in Taipei today. Not only is the Modernism and Baroque style architecture worth exploring, the street is also full of hidden gems of authentic local foods and culture. Di-Hua Street is especially busy prior to the arrival of the Chinese New Year, as shoppers pack the street to purchase traditional goods in preparation for the biggest holiday of the year.